In Defense of Christian Hungary. Religion, Nationalism and Antisemitism, 1890-1944 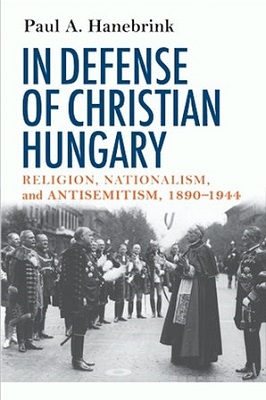 Click image to purchaseIn this important historical account of the role that religion played in defining the political life of a modern national society, Paul A. Hanebrink shows how Hungarian nationalists redefined Hungary—a liberal society in the nineteenth century—as a narrowly "Christian" nation in the aftermath of World War I. Drawing on impressive archival research, Hanebrink uncovers how political and religious leaders demanded that "Christian values" influence public life while insisting that religion should never be reduced to the status of a simple nationalist symbol.

In Defense of Christian Hungary also explores the emergence of the idea that a destructive "Jewish spirit" was the national enemy. In combining the historical study of antisemitism with more recent considerations of religion and nationalism, Hanebrink addresses an important question in Central European historiography: how nations that had been inclusive of Jews before World War I became rabidly antisemitic during the interwar period. As he traces the crucial and complex legacy of religion's role in shaping exclusionary antisemitic politics in Hungary, Hanebrink follows the process from its origins in the 1890s to the Holocaust and beyond.

More broadly, In Defense of Christian Hungary squarely addresses the relationship between antisemitic words and antisemitic violence and between religion and racial politics, deeply contested issues in the history of twentieth-century Europe. The Hungarian example is a chilling demonstration of how religious nationalism can find a home even within a pluralist and tolerant civil society.