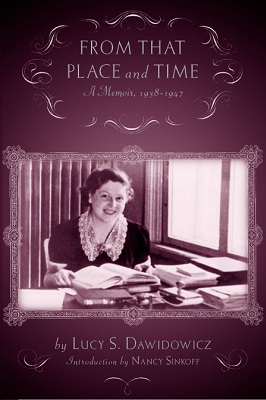 Click image to purchaseFrom that Place and Time is the memoir of Lucy S. Dawidowicz, an American-Jewish historian who set out to study Yiddish language and Jewish history at YIVO, the Jewish Scientific Institute in Vilna, Poland, in 1938. Escaping Poland only days before the Nazi onslaught, she worked in the New York YIVO during the war, and returned to Europe from 1946 to 1947 to aid Jewish displaced persons in Munich and Belsen with the American Jewish Joint Distribution Committee. Dawidowicz's memoir not only describes her pre-war year in Jewish Eastern Europe, but also treats the ghostly post-war period, and her role in salvaging what remained of Vilna's scorched Jewish archives and libraries.

Nancy Sinkoff's new introduction explores the historical forces, particularly the dynamic world of secular Yiddish culture, which shaped Dawidowicz's decision to journey to Poland and her reassessment of those forces in the last years of her life.