While America Watches: Televising the Holocaust 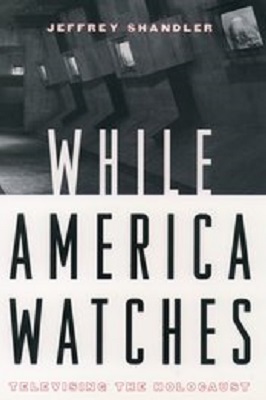 Click image to purchaseThe Holocaust holds a unique place in American public culture, and, as Jeffrey Shandler argues in While America Watches, it is television, more than any other medium, that has brought the Holocaust into our homes, our hearts, and our minds.

Much has been written about Holocaust film and literature, and yet the medium that brings the subject to most people--television--has been largely neglected. Now Shandler provides the first account of how television has familiarized the American people with the Holocaust. He starts with wartime newsreels of liberated concentration camps, showing how they set the moral tone for viewing scenes of genocide, and then moves to television to explain how the Holocaust and the Holocaust survivor have gained stature as moral symbols in American culture. From early teleplays to coverage of the Eichmann trial and the Holocaust miniseries, as well as documentaries, popular series such as All in the Family and Star Trek, and news reports of recent interethnic violence in Bosnia, Shandler offers an enlightening tour of television history.

Shandler also examines the many controversies that televised presentations of the Holocaust have sparked, demonstrating how their impact extends well beyond the broadcasts themselves. While America Watches is sure to continue this discussion--and possibly the controversies--among many readers.