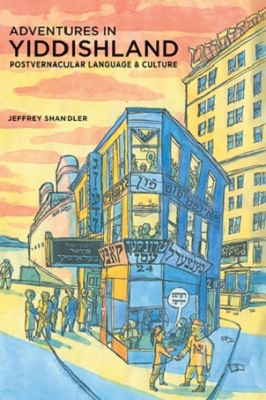 Click image to purchaseAdventures in Yiddishland examines the transformation of Yiddish in the six decades since the Holocaust, tracing its shift from the language of daily life for millions of Jews to what the author terms a postvernacular language of diverse and expanding symbolic value. With a thorough command of modern Yiddish culture as well as its centuries-old history, Jeffrey Shandler investigates the remarkable diversity of contemporary encounters with the language. His study traverses the broad spectrum of people who engage with Yiddish—from Hasidim to avant-garde performers, Jews as well as non-Jews, fluent speakers as well as those who know little or no Yiddish—in communities across the Americas, in Europe, Israel, and other outposts of "Yiddishland." 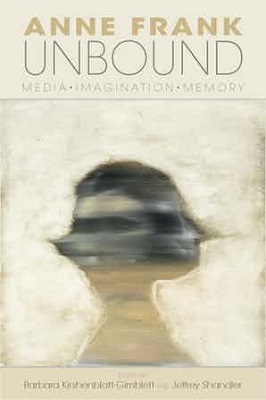 Click image to purchaseAs millions of people around the world who have read her diary attest, Anne Frank, the most familiar victim of the Holocaust, has a remarkable place in contemporary memory. Anne Frank Unbound looks beyond this young girl's words at the numerous ways people have engaged her life and writing. Apart from officially sanctioned works and organizations, there exists a prodigious amount of cultural production, which encompasses literature, art, music, film, television, blogs, pedagogy, scholarship, religious ritual, and comedy. Created by both artists and amateurs, these responses to Anne Frank range from veneration to irreverence. Although at times they challenge conventional perceptions of her significance, these works testify to the power of Anne Frank, the writer, and Anne Frank, the cultural phenomenon, as people worldwide forge their own connections with the diary and its author. 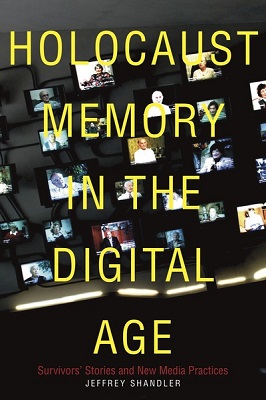 Click image to purchaseHolocaust Memory in the Digital Age explores the nexus of new media and memory practices, raising questions about how advances in digital technologies continue to influence the nature of Holocaust memorialization. Through an in-depth study of the largest and most widely available collection of videotaped interviews with survivors and other witnesses to the Holocaust, the University of Southern California Shoah Foundation's Visual History Archive, Jeffrey Shandler weighs the possibilities and challenges brought about by digital forms of public memory.

The Visual History Archive's holdings are extensive—over 100,000 hours of video, including interviews with over 50,000 individuals—and came about at a time of heightened anxiety about the imminent passing of the generation of Holocaust survivors and other eyewitnesses. Now, the Shoah Foundation's investment in new digital media is instrumental to its commitment to remembering the Holocaust both as a subject of historical importance in its own right and as a paradigmatic moral exhortation against intolerance. Shandler not only considers the Archive as a whole, but also looks closely at individual survivors' stories, focusing on narrative, language, and spectacle to understand how Holocaust remembrance is mediated. 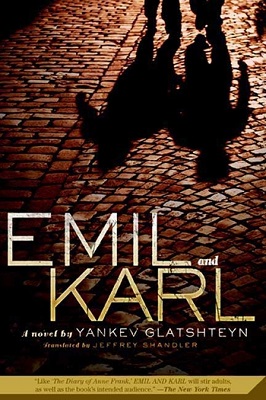 Click image to purchaseThis is a unique work. It is one of the first books written for young readers describing the early days of the event that has since come to be known as the Holocaust. Originally written in Yiddish in 1938, it is one of the most accomplished works of children's literature in this language. It is also the only book for young readers by Glatshteyn, a major American Yiddish poet, novelist, and essayist.

Written in the form of a suspense novel, Emil and Karl draws readers into the dilemmas faced by two young boys--one Jewish, the other not--when they suddenly find themselves without families or homes in Vienna on the eve of World War II. Because the book was written before World War II, and before the full revelations of the Third Reich's persecution of Jews and other civilians, it offers a fascinating look at life during this period and the moral challenges people faced under Nazism. It is also a taut, gripping, page-turner of the first order.

Jews, God, and Videotape: Religion and Media in America 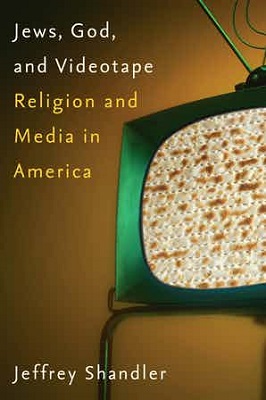 Click image to purchaseEngaging media has been an ongoing issue for American Jews, as it has been for other religious communities in the United States, for several generations. Shandler’s examples range from early recordings of cantorial music to Hasidic outreach on the Internet. In between he explores mid-twentieth-century ecumenical radio and television broadcasting, video documentation of life cycle rituals, museum displays and tourist practices as means for engaging the Holocaust as a moral touchstone, and the role of mass-produced material culture in Jews’ responses to the American celebration of Christmas.

Shandler argues that the impact of these and other media on American Judaism is varied and extensive: they have challenged the role of clergy and transformed the nature of ritual; facilitated innovations in religious practice and scholarship, as well as efforts to maintain traditional observance and teachings; created venues for outreach, both to enhance relationships with non-Jewish neighbors and to promote greater religiosity among Jews; even redefined the notion of what might constitute a Jewish religious community or spiritual experience. As Jews, God, and Videotape demonstrates, American Jews’ experiences are emblematic of how religious communities’ engagements with new media have become central to defining religiosity in the modern age.