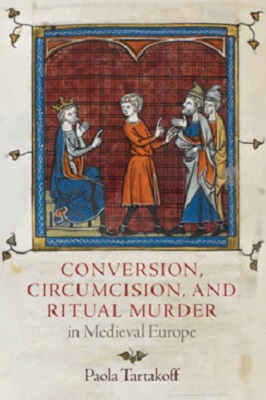 Click image to purchaseIn 1230, Jews in the English city of Norwich were accused of having seized and circumcised a five-year-old Christian boy named Edward because they "wanted to make him a Jew." Contemporaneous accounts of the "Norwich circumcision case," as it came to be called, recast this episode as an attempted ritual murder. Contextualizing and analyzing accounts of this event and others, with special attention to the roles of children, Paola Tartakoff sheds new light on medieval Christian views of circumcision. She shows that Christian characterizations of Jews as sinister agents of Christian apostasy belonged to the same constellation of anti-Jewish libels as the notorious charge of ritual murder. Drawing on a wide variety of Jewish and Christian sources, Tartakoff investigates the elusive backstory of the Norwich circumcision case and exposes the thirteenth-century resurgence of Christian concerns about formal Christian conversion to Judaism. In the process, she elucidates little-known cases of movement out of Christianity and into Judaism, as well as Christian anxieties about the instability of religious identity.