Between Christian and Jew: Conversion and Inquisition in the Crown of Aragon, 1250–1391 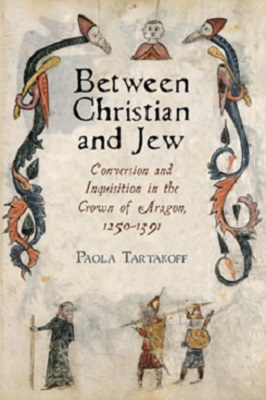 Click image to purchaseIn 1341 in Aragon, a Jewish convert to Christianity was sentenced to death, only to be pulled from the burning stake and into a formal religious interrogation. His confession was as astonishing to his inquisitors as his brush with mortality is to us: the condemned man described a Jewish conspiracy to persuade recent converts to denounce their newfound Christian faith. His claims were corroborated by witnesses and became the catalyst for a series of trials that unfolded over the course of the next twenty months. Between Christian and Jew closely analyzes these events, which Paola Tartakoff considers paradigmatic of inquisitorial proceedings against Jews in the period. The trials also serve as the backbone of her nuanced consideration of Jewish conversion to Christianity—and the unwelcoming Christian response to Jewish conversions—during a period that is usually celebrated as a time of relative interfaith harmony.