Linguistic Evidence for the Northern Origin of Selected Psalms 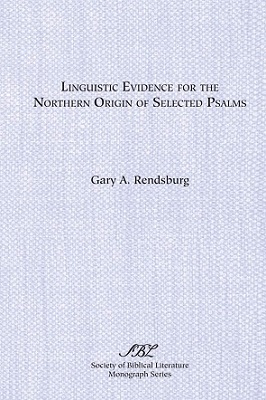 Click image to purchaseGary Rendsburg has recently distinguished himself as a Hebrew dialectologist. In this new monograph, he proposes a set of linguistic criteria by which one may identify psalms that are written in the northern Hebrew dialect, which he calls ‘Israelian Hebrew’ (IH). By these criteria he concludes that Psalms 9–10, 16, 29, 36, 45, 53, 58, 74, 116, 132, 133, 140, and 141 are all of northern origin, and as a by-product of his investigation, he isolates a list of linguistic features of IH, representing by far the boldest attempt yet to define such a dialect.

Rendsburg begins by identifying the sources for reconstructing IH. These include not only texts that are universally accepted as originating in the north (e.g., Hosea), but also accounts which concern northern figures (various narratives, tribal blessings, Balaam’s Oracles), various passages that scholars have from time to time attributed to northern sources or are said to manifest an abundance of northern linguistic features (Nehemiah 9, Deuteronomy 32, Proverbs, Job, Ecclesiastes, and Song of Songs). Texts that have linguistic or poetic affinities with Phoenician, Aramaic, or the Transjordanian dialects are all said to reflect IH.… By identifying clusters of “IH features,” then, Rendsburg concludes that the pslams in question are all of northern provence.…

Rendsburg’s contribution cannot be gainsaid. Some linguistic features that have hereinto been regarded too conveniently as archaisms, or as late and foreign intrusions into Hebrew, must now be reevaluated as such. More importantly one is reminded not to harmonize or standardize Biblical Hebrew too readily.”
—C. L. Seow, Journal of Biblical Literature