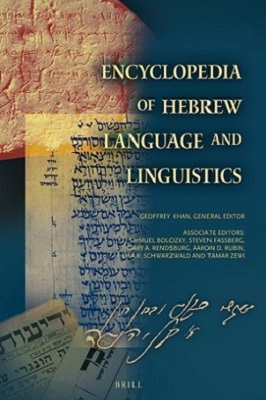 Click image to purchaseThe Hebrew language has one of the longest attested histories of any of the world’s languages, with records of its use from antiquity until modern times. Although it ceased to be a spoken language by the 2nd century C.E., Hebrew continued to be used and to develop in the form of a literary and liturgical language until its revival as a vernacular in the 20th century.
In a four volume set, complete with index, the Encyclopedia of Hebrew Language and Linguistics offers a systematic and comprehensive treatment of all aspects of the history and study of the Hebrew language from its earliest attested form to the present day. The encyclopedia contains overview articles that provide a readable synopsis of current knowledge of the major periods and varieties of the Hebrew language as well as thematically-organized entries which provide further information on individual topics, such as the Hebrew of various sources (texts, manuscripts, inscriptions, reading traditions), major grammatical features (phonology, morphology, and syntax), lexicon, script and paleography, theoretical linguistic approaches, and so forth. With over 950 entries and approximately 400 contributing scholars, the Encyclopedia of Hebrew Language and Linguistics is the authoritative reference work for students and researchers in the fields of Hebrew linguistics, general linguistics, Biblical studies, Hebrew and Jewish literature, and related fields.