“Did I Not Bring Israel Out of Egypt?” Biblical, Archaeological, and Egyptological Perspectives on the Exodus Narratives 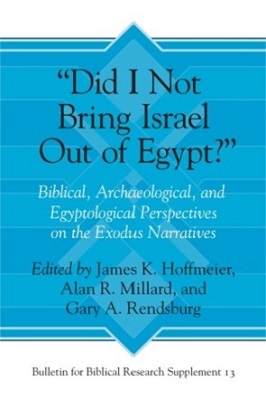 Click image to purchaseThe Hebrew Scriptures consider the exodus from Egypt to be Israel’s formative and foundational event. Indeed, the Bible offers no other explanation for Israel’s origin as a people. It is also true that no contemporary record regarding a man named Moses or the Israelites generally, either living in or leaving Egypt has been found. Hence, many biblical scholars and archaeologists take a skeptical attitude, dismissing the exodus from the realm of history. However, the contributors to this volume are convinced that there is an alternative, more positive approach. Using textual and archaeological materials from the ancient Near East in a comparative way, in conjunction with the Torah’s narratives and with other biblical texts, the contributors to this volume (specialists in ancient Egypt, ancient Near Eastern culture and history, and biblical studies) maintain that the reports in the Hebrew Bible should not be cavalierly dismissed for ideological reasons but, rather, should be deemed to contain authentic memories.