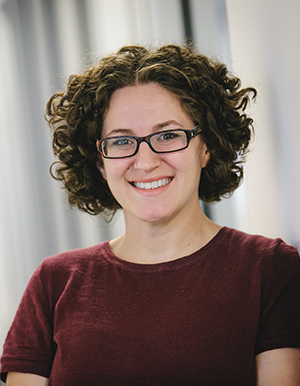 Michal Raucher joined the faculty of Jewish Studies this fall after an intensive search process. Her research lies at the intersection of Israel studies, Jewish ethics, and the anthropology of women.

Raucher’s first book, Birthing Ethics:Reproductive Ethics among Haredi Women in Jerusalem (Indiana University Press, forthcoming), is based on ethnographic research she conducted as a Fulbright fellow. Her focus is the ways in which Haredi (ultra-Orthodox) women make reproductive decisions in the technologically advanced Israeli medical system, given that they have the highest birth rate in Israel and adhere strictly to religious laws.

Raucher spent two years in Jerusalem learning from Haredi women, as well as their doctors, nurses, and doulas, and observing ultrasound examinations and prenatal classes. She found that although Haredi women are faced with patriarchal religious authorities and doctors who cater to rabbis instead of their patients, they insist on their autonomy when making decisions about reproductive practices. Raucher was awarded research grants for the book from the Wenner-Gren Foundation for Anthropological Research, the Memorial Foundation for Jewish Culture, and the Crown Family Foundation.

Before joining the faculty at Rutgers, Raucher was an assistant professor in the Department of Judaic Studies at the University of Cincinnati. She earned her Ph.D. in religious studies, with a concentration in religious ethics and anthropology, from Northwestern University. She has a master’s degree in bioethics from the University of Pennsylvania, and she graduated from the Joint Program with the Jewish Theological Seminary and Columbia University, earning bachelor of arts degrees in Hebrew Bible and religion.

Raucher has been a fellow at the Jewish Theological Seminary and a visiting scholar at the Hastings Center and Yale University’s Center for Bioethics. She has also consulted for the United Nations Population Fund, where she worked with colleagues from around the world to improve reproductive and sexual rights and health for women and children.

A native of Connecticut, Raucher is eager to return to the Northeast with her family. She says she looks forward to“teaching and learning with the exceptionally talented and thoroughly engaged students at Rutgers University, and to being part of a Jewish studies department that is filled with passionate, welcoming, and accomplished scholars.”